Floor advertising, history of the FloorWindo – part 2
Part 2. The nineties, one ex-student’s leap of faith.
15 January, 2019 by

For years that one idea had grown in the mind of former Dutch Industrial Design student Thijs Rietveld. That idea that had never really been picked up by the shoe sole company it was originally intended for.

“What if you could advertise on the floor!” Simple and clean, an exchangeable medium that could be used by anyone. A rubber mat with a transparent screen under which a poster is displayed.

Detail of the FloorWindo Classic

It had been close to a decade, but entering a design challenge and winning some prize money had finally made things possible. Thijs carried out some market research among shop owners to find out if there would be any demand, and the message was clear: “there is!”

With a friend from university he dived into the world of rubber vulcanization. They got into contact with a company that could actually make the concept into a reality. But for costs to be maintainable they had to choose, would 50 or a 100 mats be produced? A leap of faith and many trial runs later they had their 100 Infomats (as they where know at the time). 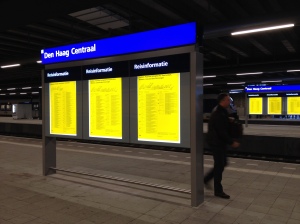 Timetable, which sparked the idea for the FloorWindo

In those days the Infomat would take close to three minutes to produce. Rubber had to be pressed into the mold, it needed to be warmed up in order to cure. There where examples of rubber not filling up all cavities, rendering the Infomat unusable. Or tearing, when the mat was taken out of the mold but had not yet completely cured.

Screens had to be ordered. The first batch from Sweden was send back as soon as it had arrived. Everything needed to be right up to spec. in order to fit.

Those early days where painstaking. But at least they where in business! Now all they had to do was sell.. As designers this was a whole new cup of tea.

Visit again in about two weeks to read how a trade show in Utrecht would set things in motion! -Update, part 3-

Read Next
Floor advertising, history of the FloorWindo – part 1
Part 1. The mid eighties, a bunch of students on a university assignment for a rubber shoe sole company in heavy weather.